About 2 years ago I traveled to rural Southern Belize. It was my first solo international adventure, and as excited as I was about it, my friends and family had very mixed reactions when I told them about my plans.
Traveling alone as a woman is still seen as controversial, or stupid, depending on who you ask. While my mother and a lot of my more adventurous friends were really excited for me, I also was told by many more people (usually people that I wasn’t very close with) that I was going to get raped or murdered if I wasn’t careful.
The irony of that statement is that I’m far more likely, at least statistically speaking, to get raped or murdered where I was living in California than I was in Belize. But no one cared about the statistics, or the research that I’d done before making the plunge and buying my ticket. They just wanted to tell me how stupid I was being, and maybe scare me into not going.
Luckily for me I had already been traveling around the states independently. I started hiking, camping, backpacking and traveling alone in college since it was just easier than trying to make plans with people who are inevitably flaky and undoubtedly annoying after a few days of constant contact. So even though I wasn’t immune to being annoyed, I was immune to being intimidated. And that is honestly my best advice for women traveling alone: Don’t be intimidated.

The best part about traveling alone is the people who you meet.

When you travel alone, you’re far more likely to make friends. Partially because people are much more likely to invite you to eat with them, or ask if you want to join them on an outing if you’re alone than if you’re already part of a defined couple/group. And partially because you’re much more likely to engage in conversation with strangers when you’re alone than if you’re focused on your group or companion.
Everything I did in Belize I did with other people. They were all people I met there and they were all things that I probably wouldn’t have had the opportunity to do if I’d gone with friends. These things ranged from going to the river to collect sand to make cement, to going night hunting (we didn’t catch anything except coconuts – but it was still pretty fun), to spear fishing lionfish. I got to do a mix of touristy things, such as visiting the Mayan ruins and caving, and local things, such as hang out at the favorite local swim spot and share stories over beer, and dancing at the ‘bar’ shack on the beach.

Southern Belize is not geared towards tourism, which for my purposes was exactly what I wanted. I wanted to go see the country – not a resort. If you’re more inclined to the all-inclusive vacation – stay close to Belize City or check out one of the resorts on the cays.
However if you want to experience Belize – head south towards the rural areas. There you’ll be able to enjoy fresh fruit and juice and from roadside stands, eat your weight in roadside fried chicken (the only fast food available), hike the jungle, visit the Mayan ruins, snorkel, kayak, and swim in waterfalls. Generally speaking, just get out and explore. More specifically definitely check out Xunantnich, which is Belize’s most famous Mayan ruin and is even featured on their national beer (yes Belize has a national beer). Caving is another must-do while in Belize, with several options to choose from, many of which were important Mayan cultural sites. As for hiking, Cockscomb national park is worth the drive if you can find a way to get there, and if you’re specifically planning to go there I recommend renting a car since it is pretty out of the way. Another good option is Blue Hole National park – not to be confused with the Great Blue Hole for which Belize is famous. Which is a good sequitur for snorkeling – definitely go snorkeling. Belize has a large barrier reef and many cays along the coast, if you can get to anywhere along those you’ll be sure to see coral and fishes. I’m sure some places are better than others, but I have no recommendations since I have no idea where I went snorkeling beyond that it was somewhere on the barrier reef.
If you really want to experience Belize let go, relax, and enjoy the adventure. If you plan too much, there will be no time for making friends, impromptu soccer games with neighbors, ice cream on the side of the road, or dancing on the beach. Don’t be afraid to get lost, talk to strangers, or go places you’ve never heard of. For the most part, the same rules apply as they do at home – you’ll know what a stupid idea looks like, and you’ll be able to walk away. As long as you keep your sense about you, the worst outcome is usually a great story to tell your friends when you get home. 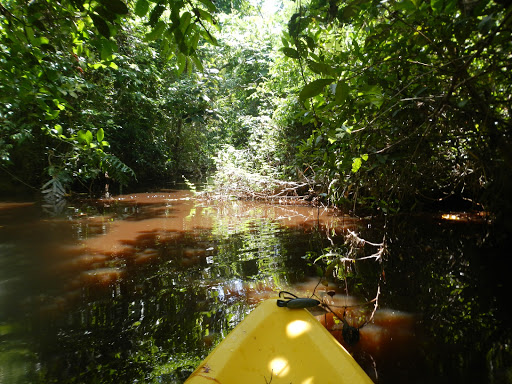 Kayaking on the tributaries that run through the jungle 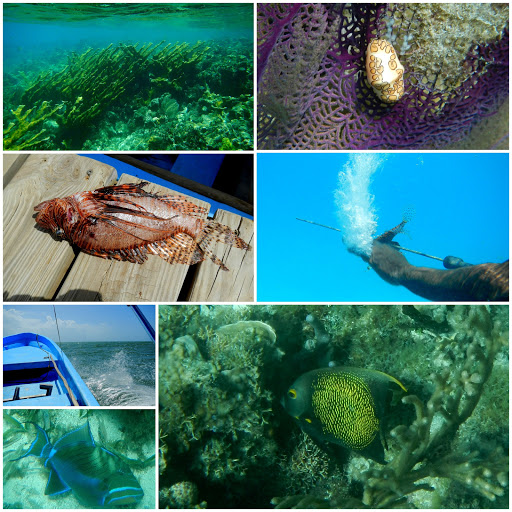 Spear fishing and snorkeling on the barrier reef with a local fishermen and a father and son I met at the guest house.

Kayaking on the tributaries that run through the jungle

Spear fishing and snorkeling on the barrier reef with a local fishermen and a father and son I met at the guest house.