This is the perfect weekend length adventure, although as it turns out…it’s not an official campsite anymore so I highly suggest you don’t do it.

We started out on Saturday by hiking up to the Big Sur River Gorge. I had a hankering for a summer swimming hole – and this satisfied that desire perfectly. It’s about a mile hike round trip from the parking lot to the Gorge, only some of it is on a trail so I highly recommend wearing good water shoes so you can easily scramble over rocks and wade through the river. Once you’re at the Gorge, it’s beautiful, lively, and fun. It’s a popular spot, so don’t expect to be alone! But if you’re looking for some fun in the sun – this is the perfect place to go.

After the Gorge, we stopped at Nepenthe for drinks and appetizers on the front patio. The view is amazing, but the menu is expensive. Drinks and appetizers are less expensive than dinner, and are just as filling! Plus on a nice afternoon it’s far more enjoyable to sit outside and enjoy the Big Sur Coastline.

After refueling, we headed south to Partington Cove. The trail head for the Tan Bark Trail is located on the East side of Highway one, directly opposite Partington Cove. We took the Tan Bark Trail up to Swiss Camp (which has been renamed, and is also not an official campsite anymore) where we camped for the night. Despite the fact that it was only about three miles to reach camp, it felt more like five. There’s about a 1900ft elevation gain between the trail head and Swiss Camp. Basically, if you’re worried you’re heart might explode, do not attempt this hike.

We continued up the Tan Bark Trail (amazingly it continued uphill for about another half mile) to the Tin House, which was a pretty cool little detour. After exploring the Tin House, we headed back towards the where the Tan Bark Trail dead ends into a fire road (which finally starts the descent) that leads back to Highway 1. The last three-quarters of a mile on this loop are along Highway 1 to Partington Cove. It’s a little sketchy, but in general I thought it would be a lot scarier than it was. As a bonus, while we were walking along Highway 1 we saw about five California Condors perched just above the highway. 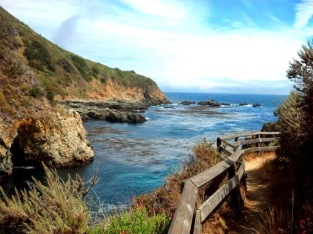 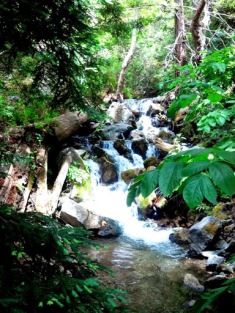 Once back to where we parked the car, we ditched our gear, hydrated, and then did the short walk down the Partington Cove. We went up Partington Creek to the waterfall first, and then followed the trail back down and took the left fork across the bridge and through the tunnel to the cove.

In total it was probably about seven or eight miles total (the Swiss Camp Loop was about six of those). It turned out to be just about the perfect distance for us, seeing as we both had to return to work on Monday morning.

In summation: we will definitely be visiting the Big Sur River Gorge again, most likely with a six pack in hand for a lazy day at the river. And Partington Cove? It’s the perfect picnic spot! However, due to the fact that we now realize that we were most likely squatting on public land – we won’t be returning to camp at Swiss Camp. Having said that I highly recommend the hike to the Tin House (it has a great view and is just plain cool), especially via the Tan Bark Trail because it was so very beautiful. Just be prepared for downed trees and some unmaintained sections of trail since this trail was only reopened in 2012.

One thought on “The Big Sur River Gorge, Swiss Camp , and Partington Cove”